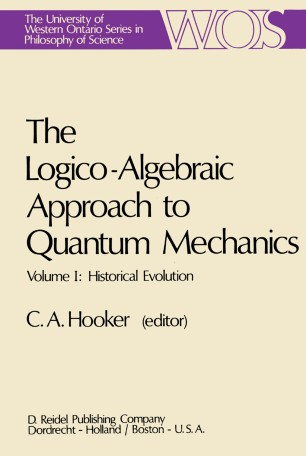 The Logico-Algebraic Approach to Quantum Mechanics

Part of the The University of Western Ontario Series in Philosophy of Science book series (WONS, volume 5a)

The twentieth century has witnessed a striking transformation in the un­ derstanding of the theories of mathematical physics. There has emerged clearly the idea that physical theories are significantly characterized by their abstract mathematical structure. This is in opposition to the tradi­ tional opinion that one should look to the specific applications of a theory in order to understand it. One might with reason now espouse the view that to understand the deeper character of a theory one must know its abstract structure and understand the significance of that struc­ ture, while to understand how a theory might be modified in light of its experimental inadequacies one must be intimately acquainted with how it is applied. Quantum theory itself has gone through a development this century which illustrates strikingly the shifting perspective. From a collection of intuitive physical maneuvers under Bohr, through a formative stage in which the mathematical framework was bifurcated (between Schrödinger and Heisenberg) to an elegant culmination in von Neumann's Hilbert space formulation the elementary theory moved, flanked even at the later stage by the ill-understood formalisms for the relativistic version and for the field-theoretic altemative; after that we have a gradual, but constant, elaboration of all these quantal theories as abstract mathematical struc­ tures (their point of departure being von Neumann's formalism) until at the present time theoretical work is heavily preoccupied with the manip­ ulation of purely abstract structures.