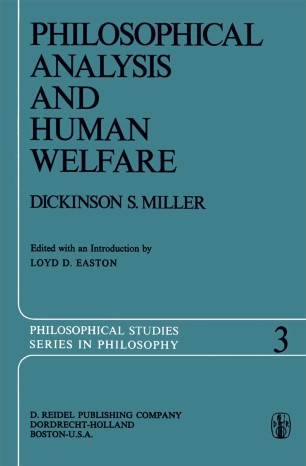 When I was Dickinson Miller's assistant from 1940 to 1942, I soon realized that I had encountered an unusually powerful, acute, and original mind and a writer whose clear but vivid style matched the high quality of his intelligence. These traits were apparent in his comments about eminent philosophers with whom he had associated - particularly William James but also Santayana, Dewey, Husserl, and Wittgenstein - and in the mutual criticism he demanded of his writing and my first efforts. I was pleased and felt immensely privileged to share in his planning of a book devoted to "analysis, the method of philosophy at work" as in his articles on the knowledge-problem, induction, and free will. In view of the penetration of his articles, such a book seemed long overdue as James had insisted even in 1905. When Miller's projected book on "analysis at work" did not appear by 1956, I consulted him about putting together a collection of his published essays. Such a collection seemed but slight homage to one who had made such a striking contribution to American philosophy in rela­ tion to James and one from whom I had learned so much. He felt, however, that such a collection would be inappropriate and preferred to concentrate on a book, never finished, on "the principles of practical intelligence", the application of intelligence in a "morality of results" for human welfare.