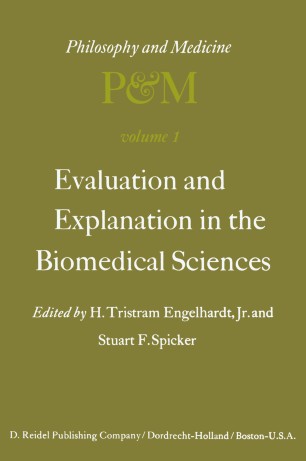 Evaluation and Explanation in the Biomedical Sciences

Proceedings of the First Trans-Disciplinary Symposium on Philosophy and Medicine Held at Galveston, May 9–11, 1974

Part of the Philosophy and Medicine book series (PHME, volume 1)

This volume inaugurates a series concerning philosophy and medicine. There are few, if any, areas of social concern so pervasive as medicine and yet as underexamined by philosophy. But the claim to precedence of the Proceedings of the First Trans-Disciplinary Symposium on Philos­ ophy and Medicine must be qualified. Claims to be "first" are notorious in the history of scientific as well as humanistic investigation and the claim that the First Trans-Disciplinary Symposium on Philosophy and Medicine has no precedent is not meant to be put in bald form. The editors clearly do not maintain that philosophers and physicians have not heretofore discussed matters of mutual concern, nor that individual philosophers and physicians have never taken up problems and concepts in medicine which are themselves at the boundary or interface of these two disciplines - concepts like "matter," "disease," "psyche. " Surely there have been books published on the logic and philosophy of medi­ 1 cine. But the formalization of issues and concepts in medicine has not received, at least in this century, sustained interest by professional phi­ losophers. Groups of philosophers have not engaged medicine in order to explicate its philosophical presuppositions and to sort out the various concepts which appear in medicine. The scope of such an effort takes the philosopher beyond problems and issues which today are subsumed under the rubric "medical ethics.