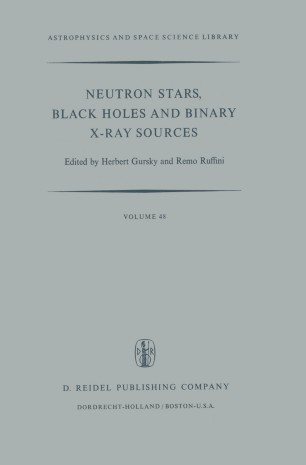 This book contains a set of articles based on a session of the annual meeting of the American Association for the Advancement of Science held in San Francisco in February, 1974. The reason for the meeting arose from the need to communicate to the largest possible scientific community the dramatic advances which have been made in recent years in the understanding of collapsed objects: neutron stars and black holes. Thanks to an unprecedented resonance between X-ray, y-ray, radio and optical astronomy and important new theoretical developments in relativistic astro­ physics, a new deep understanding has been acquired of the physical processes oc­ curring in the late stages of evolution of stars. This knowledge may be one of the greatest conquests of man's understanding of nature in this century. This book aims to give an essential and up-to-date view in this field. The analysis of the physics and astrophysics of neutron stars and black holes is here attacked from both theoretical and experimental points of view. In the experimental field we range from the reviews and catalogues of galactic X-ray sources (R. Gursky and E. Schreier) and pulsars (E. Groth) to the observations of the optical counter­ part of X-ray sources (P. Boynton) to finally the recently discovered gamma-ray bursts (I. Strong) and pulse astronomy R. B. Partridge).