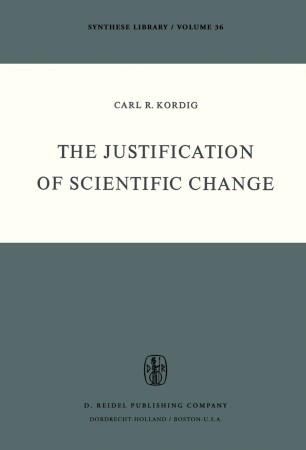 The Justification of Scientific Change

In this book I discuss the justification of scientific change and argue that it rests on different sorts of invariance. Against this background I con­ sider notions of observation, meaning, and regulative standards. My position is in opposition to some widely influential and current views. Revolutionary new ideas concerning the philosophy of science have recently been advanced by Feyerabend, Hanson, Kuhn, Toulmin, and others. There are differences among their views and each in some respect differs from the others. It is, however, not the differences, but rather the similarities that are of primary concern to me here. The claim that there are pervasive presuppositions fundamental to scientific in­ vestigations seems to be essential to the views of these men. Each would further hold that transitions from one scientific tradition to another force radical changes in what is observed, in the meanings of the terms employed, and in the metastandards involved. They would claim that total replace­ ment, not reduction, is what does, and should, occur during scientific revolutions. I argue that the proposed arguments for radical observational variance, for radical meaning variance, and for radical variance of regulative standards with respect to scientific transitions all fail. I further argue that these positions are in themselves implausible and methodologically undesirable. I sketch an account of the rationale of scientific change which preserves the merits and avoids the shortcomings of the approach of radical meaning variance theorists.