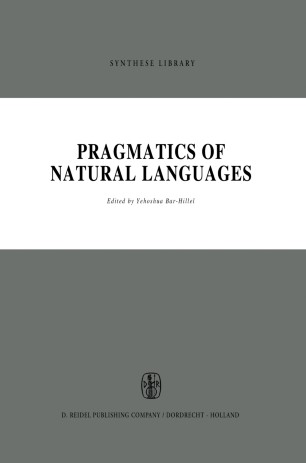 In June 22-27,1970, an International Working Symposium on Pragmatics of Natural Languages took place in Jerusalem under the auspices of The Israel Academy of Sciences and Humanities and the Division of Logic, Methodology and Philosophy of Science of the International Union of History and Philosophy of Science.! Some thirty philosophers, logicians, linguists, and psychologists from Israel, U.S.A., West-Germany, England, Belgium, France, Scotland, and Denmark met in seven formal and a number of informal sessions in order to discuss some ofthe problems around the use and acquisition oflanguage which in the eyes of an increasing number of scholars have been left under­ treated in the recent upsurge ofinterest in theoretical linguistics and philos­ ophy of language. More specifically, during the formal sessions the following topics were discussed: The validity of the syntactics-seman tics-pragmatics trichotomy The present state of the competence-performance issue Logic and linguistics The New Rhetoric Speech acts Language acquisition. The participants in the Symposium distributed among themselves re­ prints and preprints of relevant material, partly in advance of the meeting, partly at its beginning. Each session was introduced by one or two modera­ tors, and summaries of each day's proceedings were prepared and distri­ buted the next day. The participants were invited to submit papers after the symposium, written under its impact. The eleven essays published here are the result.