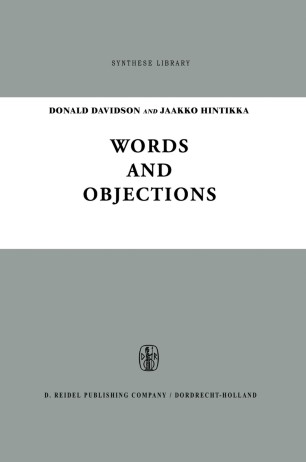 Essays on the Work of W. V. Quine

It is gratifying to see that philosophers' continued interest in Words and Objections has been so strong as to motivate a paperback edition. This is gratifying because it vindicates the editors' belief in the permanent im­ portance of Quine's philosophy and in the value of the papers com­ menting on it which were collected in our volume. Apart from a couple of small corrections, only one change has been made. The list of Professor Quine's writings has been brought up to date. The editors cannot claim any credit for this improvement, however. We have not tried to imitate the Library of Living Philosophers volumes and to include Professor Quine's autobiography in this volume, but we are fortunate to publish here his brand-new auto bibliography. 1975 THE EDITORS TABLE OF CONTENTS V PREFACE 1 EDITORIAL INTRODUCTION 1. 1. C. SMAR T / Quine's Philosophy of Science 3 GILBERT HARMAN / An Introduction to 'Translation and Meaning', Chapter Two of Word and Object 14 ERIK STENIUS / Beginning with Ordinary Things 27 NOAM CHOMSKY / Quine's Empirical Assumptions 53 1AAKKO HINTIKKA / Behavioral Criteria of Radical Translation 69 BARRY STROUD / Conventionalism and the Indeterminacy of Translation 82 P. F. STRA WSON / Singular Terms and Predication 97 118 H. P. GRICE / Vacuous Names P. T.