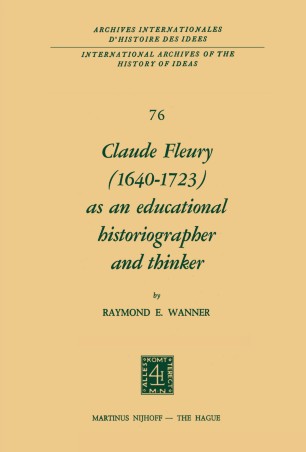 Claude Fleury (1640–1723) as an Educational Historiographer and Thinker

This study has grown out of an interest in French education and cul­ ture that dates from fondly remembered student days in France. Specifically, it is an attempt to explain the educational thought of Claude Fleury, a literate, responsible homme de leUres who analyzed the historical origins of public education as it existed in seventeenth-cen­ tury France and, on that basis, proposed what he considered to be a more generally useful program of studies. Generous space has been devoted to historical, social, and pedagogical background in an effort to place Fleury's thought in its proper cultural context; namely, that of the decline of the Classical Age and the dawn of the Age of Reason. This background material represents also an attempt to explain, at times in detail, the origin of Fleury's Traite du Choix et de la Methode des Etudes and his rise to scholarly and pedagogical prominence at court. It is possible that Fleury's thought, while of most immediate interest to students of seventeenth-century cultural history, will be of interest also to a more general audience. In particular, those charged with providing education that must respond to the ever increasing practical needs of society and at the same time give to contemporary man a of his cultural heritage may find in Fleury's thought some useful sense historical perspective. It is a pleasure to acknowledge that this study would not have been possible without the encouragement and guidance of Dr. William W.