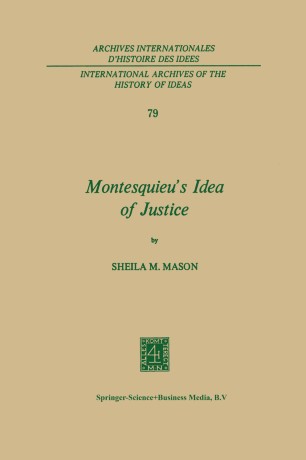 Part One of Montesquieu's Idea of Justice comprises a survey of the currency in philosophical, ethical and aesthetic debate during the second half of the 17th century of the terms rapport and convenance, which are central to the enigmatic definition given to justice by Mon­ tesquieu in Lettres Persanes LXXXllI. In this survey, attention is concen­ trated on the way in which the connotations of these terms fluctuate with the divergent development of the methodological and speculative outgrowths of Cartesian ism into two schools of thought, materialist and idealist, often widely at variance in their views of the nature and orga­ nization of the universe. In Part Two, Montesquieu's definition of justice is set against this background, whose doctrinal conflicts, because of the characteristic as­ sociations of its key terms, it may be taken to reflect, just as it may be held to epitomize, by virtue of its elaboration in the opening chapter of De l' Esprit des Lois and its close terminological affinities with the defini­ tion of law there given, an undoubtedly related conflict between the implications of causal determinism and the aspirations of idealist meta­ physics surviving at the heart of Montesquieu's outlook, and, remaining unresolved, often said to impair the coherence if not the validity of his theory of society.