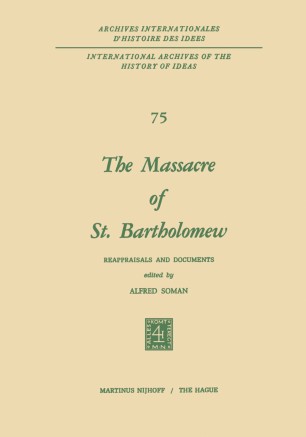 The Massacre of St. Bartholomew

On 18 August 1572, Marguerite de Valois, sister of King Charles IX, was married in Paris to Henri de Navarre, "first prince of the blood" and a Protestant. This union, which was to cement the provisions of the Peace of St. Germain (1570) ending the third of the French wars of religion, was the occasion of an extraordinary influx of French Calvin­ ists into the notoriously Catholic capital. Hundreds of Huguenots had journeyed to Paris to honor their titular leader and participate in the wedding celebrations. Tensions were already running high when the court made the fatal decision to take advantage of the situation and assassinate the admiral of France, Gaspard de Coligny, the recognized leader of the Huguenot armies which had helped plunge the country into ten years of intermittent civil war, and who now threatened to embroil the kingdom in a full-scale foreign war with Spain. On Friday the twenty-second, as he returned from the Louvre to his lodgings, Coligny paused in the street - some say to receive a letter, others to doff his hat to an acquaintance or to adjust his hose - and was fired on by a hired assassin hidden in a house known to belong to one of the ultra-Catholic Guise faction. The arquebus shot missed its mark and succeeded only in wounding the admiral in his hand and arm, where­ upon he was carried by his followers to his bed.