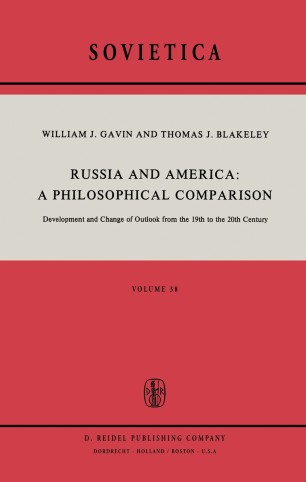 Russia and America: A Philosophical Comparison

In this year of bicentennial celebration, there will no doubt take place several cultural analyses of the American tradition. This is only as it should be, for without an extensive, broad-based inquiry into where we have come from, we shall surely not foresee where we might go. Nonetheless, most cultural analyses of the American context suffer from a common fault - the lack of a different context to use for purposes of comparison. True, American values and ideals were partly inherited from the European tradition. But that tradition is in many ways an inadequate mode of comparison. Without going too far afield, let us note two points: first, European culture was the proud inheritor of the Renaissance tradition, and, going back still further, of classical culture; second, the European countries are compact. Their land masses are such that the notion of "frontier" simply would not have arisen in the same way as it did in America. On the other side of the globe, however, there does exist a country capable of serving as a suitable mirror. We speak, of course, of Russia. That country also came relatively late onto the cultural horizon, and was not privy to the Renaissance tradition. Furthermore, her land mass is such as to be "experi­ mentally infmite" in character - not unlike the American frontier. It is hoped that much can be leamed about the present cultural context by com­ paring the two countries in their youthful stages.