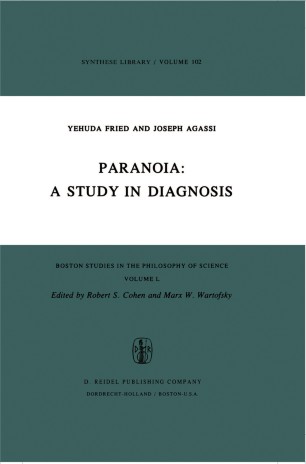 Paranoia: A Study in Diagnosis

Part of the Boston Studies in the Philosophy of Science book series (BSPS, volume 50)

There is a curious parallel between the philosophy of science and psychiatric theory. The so-called demarcation question, which has exercised philosophers of science over the last decades, posed the problem of distinguishing science proper from non-science - in par­ ticular, from metaphysics, from pseudo-science, from the non­ rational or irrational, or from the untestable or the empirically meaningless. In psychiatric theory, the demarcation question appears as a problem of distinguishing the sane from the insane, the well from the mentally ill. The parallelism is interesting when the criteria for what fails to be scientific are seen to be congruent with the criteria which define those psychoses which are marked by cognitive failure. In this book Dr Yehuda Fried and Professor Joseph Agassi - a practicing psychiatrist and a philosopher of science, respectivel- focus on an extreme case of psychosis - paranoia - as an essentially intellectual disorder: that is, as one in which there is a systematic and chronic delusion which is sustained by logical means. They write: "Paranoia is an extreme case by the very fact that paranoia is by definition a quirk of the intellectual apparatus, a logical delusion. " (p. 2.