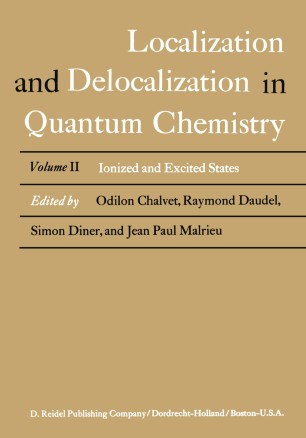 Part of the Localization and Delocalization in Quantum Chemistry book series (LDQC, volume 2)

The second volume of the proceedings of the international seminar devoted to locali· zation and delocalization in quantum chemistry is divided into four parts. The first one is mainly concerned with the localizability of electrons in ionized and exited states. The second part shows how is it possible to take advantage of the localizability of electrons to compute molecular wave-functions. The third part of the book is an homogeneous analysis of the electronic collective excitation and of the motion of excitons in organic solids. The last section is devoted to the study of the role of electron localizability in the chemical reactivity of molecules. Concluding remarks are concerned with a careful analysis of the localizability concept itself in relation with a possible interpretation of the wave-mechanics. PART I ELECTRON LOCALIZATION IN IONIZED AND EXCITED STATES APPLICATIONS OF PAIR DENSITY ANALYSIS R. CONSTANCIEL and L. ESNAULT Centre de Mecanique Ondulatoire Appliquee, Paris, France Abstract. The method of pair density analysis is applied to various kinds of calculations. We examine the influence of the quality of the wavefunction and of the nuclear configuration; the problem of hybridization is discussed, as weIl as the relations between separability and excitation.