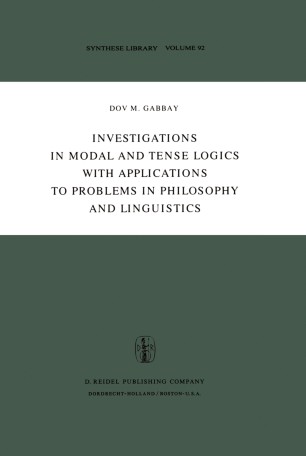 This book is intended to serve as an advanced text and reference work on modal logic, a subject of growing importance which has applications to philosophy and linguistics. Although it is based mainly on research which I carried out during the years 1969-1973, it also includes some related results obtained by other workers in the field (see the refer­ ences in Part 7). Parts 0, 1 and 2, can be used as the basis of a one year graduate course in modal logic. The material which they contain has been taught in such courses at Stanford since 1970. The remaining parts of the book contain more than enough material for a second course in modal logic. The exercises supplement the text and are usually difficult. I wish to thank Stanford University and Bar-Han University for making it possible for me to continue and finish this work, and A. Ungar for correcting the typescript. Bar-Ilan University, Israel Dov M. GABBA Y PART 0 AN INTRODUCTION TO GENERAL INTENSIONAL LOGICS CHAPTER 0 CONSEQUENCE RELATIONS Motivation We introduce the notions of a consequence relation (which is a generalization of the notion of a logical system) and of a semantics. We show that every consequence relation is complete for a canonical semantics. We define the notion of one semantics being Dian in another and study the basic properties of this notion. The concepts of this chapter are generalizations of the various notions of logical system and possible world semantics found in the literature.