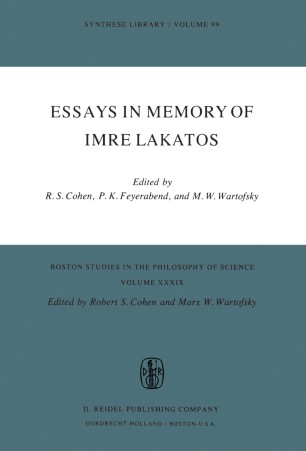 Essays in Memory of Imre Lakatos

Part of the Boston Studies in the Philosophy of Science book series (BSPS, volume 39)

The death of Imre Lakatos on February 2, 1974 was a personal and philosophical loss to the worldwide circle of his friends, colleagues and students. This volume reflects the range of his interests in mathematics, logic, politics and especially in the history and methodology of the sciences. Indeed, Lakatos was a man in search of rationality in all of its forms. He thought he had found it in the historical development of scientific knowledge, yet he also saw rationality endangered everywhere. To honor Lakatos is to honor his sharp and aggressive criticism as well as his humane warmth and his quick wit. He was a person to love and to struggle with. PAUL K. FEYERABEND ROBERT S. COHEN MARX W. WARTOFSKY TABLE OF CONTENTS Preface VII JOHN WORRALL / Imre Lakatos (1922-1974): Philosopher of Mathematics and Philosopher of Science JOSEPH AGASSI / The Lakatosian Revolution 9 23 D. M. ARMSTRONG / Immediate Perception w. W. BAR TLEY, III/On Imre Lakatos 37 WILLIAM BERKSON / Lakatos One and Lakatos Two: An Appreciation 39 I. B. COHEN / William Whewell and the Concept of Scientific Revolution 55 L. JONATHAN COHEN / How Can One Testimony Corroborate Another? 65 R. S. COHEN / Constraints on Science 79 GENE D'AMOUR/ Research Programs, Rationality, and Ethics 87 YEHUDA ELKANA / Introduction: Culture, Cultural System and Science 99 PA UL K.