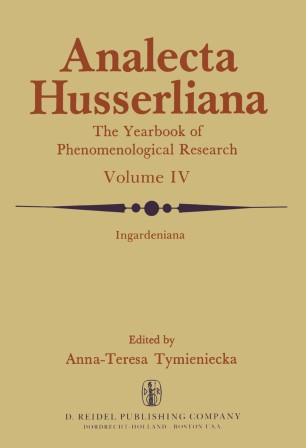 A Spectrum of Specialised Studies Establishing the Field of Research

Studies on different aspects of Roman Ingarden's Philosophy have been published during the last thirty years. They were meant partly to in­ vestigate the contribution of that thinker to phenomenological philoso­ phy, which was then dominant in WestemEurope, partly to arouse interest in a philosopher who was, at that time, practically unknown. The publication by the present editor of For Roman Ingarden: Nine Essays in Phenomenology, a Festschrift for his 65th birthday, marked the beginning of an interest in his thought. Subsequently, Ingarden has lectured abroad, and a number of his hitherto inaccessible Polish works have been made available, some translated into German and some even into English. This has led to further studies of his thought. However, the majority of the papers published have until now been mainly introductory. This volume offers for the first time a series of systematic studies in Ingardenian philosophy, which, it is hoped, will supply a general framework as well as a foundation for future research in this wide and difficult field.