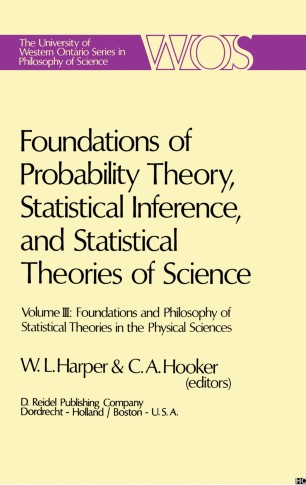 Part of the The University of Western Ontario Series in Philosophy of Science book series (WONS, volume 6c)

In May of 1973 we organized an international research colloquium on foundations of probability, statistics, and statistical theories of science at the University of Western Ontario. During the past four decades there have been striking formal advances in our understanding of logic, semantics and algebraic structure in probabilistic and statistical theories. These advances, which include the development of the relations between semantics and metamathematics, between logics and algebras and the algebraic-geometrical foundations of statistical theories (especially in the sciences), have led to striking new insights into the formal and conceptual structure of probability and statistical theory and their scientific applications in the form of scientific theory. The foundations of statistics are in a state of profound conflict. Fisher's objections to some aspects of Neyman-Pearson statistics have long been well known. More recently the emergence of Bayesian statistics as a radical alternative to standard views has made the conflict especially acute. In recent years the response of many practising statisticians to the conflict has been an eclectic approach to statistical inference. Many good statisticians have developed a kind of wisdom which enables them to know which problems are most appropriately handled by each of the methods available. The search for principles which would explain why each of the methods works where it does and fails where it does offers a fruitful approach to the controversy over foundations.