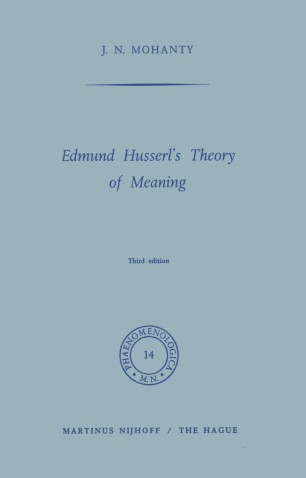 In this work I have tried to present HusserI's Philosophy of thinking and meaning in as clear a manner as I can. In doing this, I had in mind a two-fold purpose. I wanted on the one hand to disentangle what I have come to regard as the central line of thought from the vast mass of details of the Logische Unter­ suchungen and the Formale und transzendentale Logik. On the other hand, I tried to take into consideration the immense developments in logic and semantics that have taken place since HusserI's major logical studies were published. It is my belief that no one to day can look back upon the philosophers of the past except in the light of the admirable progress achieved and consolidated in the fields of logic and semantics in recent times. Fortunately enough, from this point of view HusserI fares remarkably well. He certainly anticipated many of those recent investigations. What is more, a true understanding and appraisal of his logical studies is not possible except in the light of the corresponding modern investigations. This last consider­ ation may provide us with some explanation of the rather puzzling fact that orthodox HusserIian scholarship both within and outside Germany has not accorded to his logical studies the central importance that they, from all points of view, unmis­ takeably deserve.