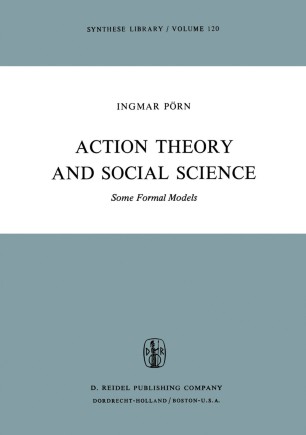 This book is intended as a contribution to the foundations of the sciences of man, especially the social sciences. It has been argued with increasing frequency in recent years that the vocabulary of social science is to a large extent an action vocabulary and that any attempt to systematize concepts and establish bases for understanding in the field cannot, therefore, succeed unless it is firmly built on action theory. I think that these claims are sub­ stantially correct, but at the same time it seems to me that action theory, as it is relevant to social science, still awaits vital contributions from logic and philosophy. For example, it has often been said, rightly I believe, that situa­ tions in which two or more agents interact constitute the subject-matter of social science. But have we got an action theory which is rich enough or com­ prehensive enough to allow us to characterize the interaction situation? I think not. Once we have such a theory, however, we should be able to give an accurate account of central social phenomena and to articulate our concep­ tions about the nature of social reality. The conceptual scheme advanced in this book consists, in the first instance, of solutions to a number of characterization problems, i. e. problems which may be expressed by questions of the form "What is the nature of . . .