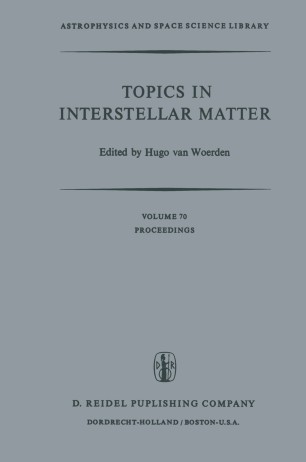 Invited Reviews Given for Commission 34 (Interstellar Matter) of the International Astronomical Union, at the Sixteenth General Assembly of IAU, Grenoble, August 1976

Interstellar matter is one of the most active fields of research in present-day astronomy. Observational information spans the full electromagnetic spectrum from gamma rays through rocket-ultraviolet, optical, infrared and millimeter to long radio waves. Results of research in physical chemistry find as much application as mathematical methods. Interstellar matter plays a leading role in studies of our Galaxy and of external galaxies, and contributes increasingly to stellar astronomy. At the 16th General Assembly of the International Astronomical Union, held in August 1976 in Grenoble, France, the many new developments in this vast field were surveyed in a number of sessions of Commission 34 (Interstellar Matter), mostly jointly with other Commissions of the Union. Separate sessions were devoted to: The hot interstellar gas phase, Interaction of stars and interstellar medium, Interstellar molecules and dust, The large-scale distribution of interstellar matter in the Galaxy, and Interstellar matter in external galaxies. Twenty-four invited review papers were presented and discussed in these sessions. The quality and success of these topical reviews made it seem desirable to make them available to a wider audience. Professor Edith Muller, the new General Secretary of the IAU, enthusiastically supported the idea. Most importantly, the reviewers - who had originally been pro­ mised that an oral paper was the only requirement - agreed to prepare written versions. I am grateful to Mrs. Muller, to the authors, and to Reidel Publishing for their collaboration in the preparation of this book.