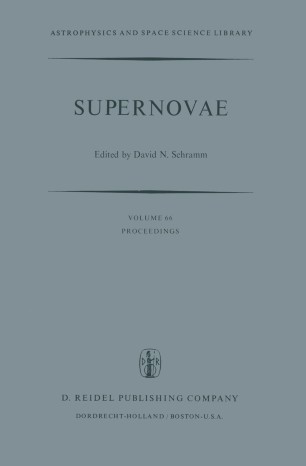 The Proceedings of a Special IAU Session on Supernovae Held on September 1, 1976 in Grenoble, France

Supernovae are among the most exciting things occurring in the universe. Much recent research has concentrated on phenomena related to supernovae. For example, the origin of the cosmic rays and the origin of the bulk of the heavy elements seem to be closely associated with the phenomenon of supernovae. With the discovery of the pulsar in the Crab, it seemed clear that supernovae were also intimately as­ sociated with the formation of neutron stars and perhaps even black holes. The purpose of the conference, of which this volume contains the proceedings, was to bring together the leaders of supernova re­ search, each of whom has concentrated on different aspects of the problem, to try to form a coherent picture both observationally and theoretically of our current understanding of supernovae. In so doing, key invited talks were presented on the light curves of super­ novae, both observationally and theoretically; on the possible uses of supernovae, for example in determination of the Hubble Constant; on the formation and evolution of supernova remnants, again both ob­ servationally and theoretically. The possibility that supernovae might explain quasars was also presented. A review of the current status of statistics of supernovae was presented, giving the rate at which they go off and the implications with regard to what mass stars are the progenitors for supernovae. Again, this was presented both from the observational point of view and from the theoretical stellar evolution point of view.