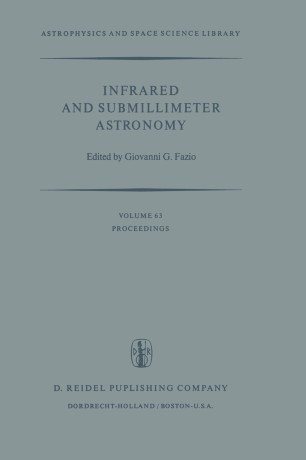 The Symposium on Infrared and Submillimeter Astronomy was held in Philadelphia, Pennsylvania, U.S.A., on June 8-10, 1976, as an activity associated with the Nineteenth Plenary Meeting of the Committee on Space Research (CaSPAR). The Symposium was sponsored jointly by CaSPAR, the International Astronomical Union (IAU) and the International Union of Radio Science CURSI). caSPAR is an interdisciplinary scientific organization, established by the International Council of Scientific Unions in 1958, to, in the words of its charter, "provide the world scientific community with the means whereby it may exploit the possibilities of satellites and space probes of all kinds for scientific purposes and exchange the resulting data on a co­ operative basis." The purpose of this particular CaSPAR Sympo­ sium was to present new results in infrared and submillimeter astronomy obtained by observations on aircraft, high altitude balloons, rockets, satellites, and space probes. Topics dis­ cussed included the Sun, the solar system, galactic and extra­ galactic objects as well as the cosmic background radiation. Instrumentation for observations in infrared and submillimeter astronomy was also discussed, with particular emphasis on future programs from space observatories.