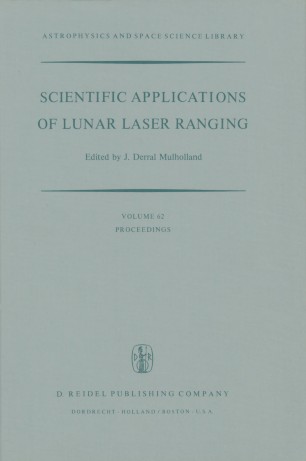 The progress of science during the past centuries has been in some measure energized by the development of new technologies. People are no more intelligent now than they were five centuries ago, or indeed five millenia ago. The differences are in the pool of past experience and the availability of means for manipulating the physical and mental environment. Until fairly recently, the development of new technologies in astronomy and geodesy has served primarily either to broaden the scope of phenomena that could be studied or to improve the precision with which one could examine already-studied phenomena. There seemed to be no likelihood that a situation could arise similar to that in particle physics, where the uncertainty principle indicates that the observation of the state of an object alters that state, affecting the observation. Indeed, we have not yet reached that point, but certain of the new techniques have introduced a degree of complication and inter­ dependence perhaps not previously encountered in the macro­ sciences. When observational capability is so fine that the data can be corrupted by the tidal motions of the instruments, for example, then there are a myriad of physical effects that must be considered in analyzing the data; the happy aspect of this is that the data can be used to study exactly these same effects. The complication does not, however, extend only to predictive computations against which the data are compared.