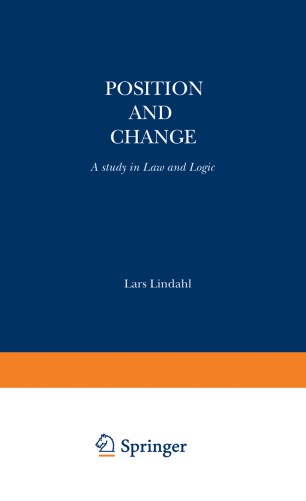 A Study in Law and Logic

The present study which I have subtitled A Study in Law and Logic was prompted by the question of whether an investigation into law and legal systems could lead to the discovery of unrevealed fundamental patterns common to all such systems. This question was further stimulated by two interrelated problems. Firstly, could an inquiry be rooted in specifically legal matters, as distinct from the more usual writings on deontic logic? Secondly, could such inquiry yield a theory which would nevertheless embrace a strict and simple logical structure, permitting substantive conclusions in legal matters to be deduced from simple rules governing some basic concepts? Before the development of deontic logic, W. N. Hohfeld devoted his efforts to this question at the beginning of this century. However, with this exception, few jurists have studied the interrelation between law and logic projected in this way. Nevertheless, two great names are to be found, Gottfried Wilhelm Leibniz and Jeremy Bentham-both philo­ sophers with legal as weIl as logical training. Bentham's investigations of logical patterns in law have only recently attracted attention; and as for Leibniz, his achievements are still almost totally unexplored (his most important writings on law and logic have not even been translated from Latin). My initial interest in the question was evoked by Professor Stig Kanger. Although primarily a logician and philosopher, Stig Kanger has been interested also in the fundamentals of legal theory.