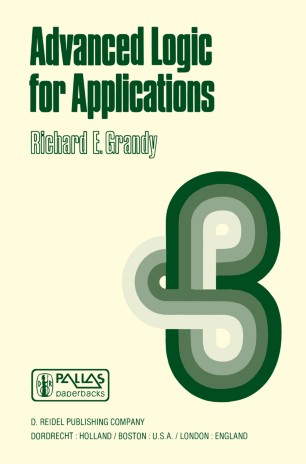 Part of the A Pallas Paperback book series (SYLI, volume 110)

This book is intended to be a survey of the most important results in mathematical logic for philosophers. It is a survey of results which have philosophical significance and it is intended to be accessible to philosophers. I have assumed the mathematical sophistication acquired· in an introductory logic course or in reading a basic logic text. In addition to proving the most philosophically significant results in mathematical logic, I have attempted to illustrate various methods of proof. For example, the completeness of quantification theory is proved both constructively and non-constructively and relative ad­ vantages of each type of proof are discussed. Similarly, constructive and non-constructive versions of Godel's first incompleteness theorem are given. I hope that the reader· will develop facility with the methods of proof and also be caused by reflect on their differences. I assume familiarity with quantification theory both in under­ standing the notations and in finding object language proofs. Strictly speaking the presentation is self-contained, but it would be very difficult for someone without background in the subject to follow the material from the beginning. This is necessary if the notes are to be accessible to readers who have had diverse backgrounds at a more elementary level. However, to make them accessible to readers with no background would require writing yet another introductory logic text. Numerous exercises have been included and many of these are integral parts of the proofs.