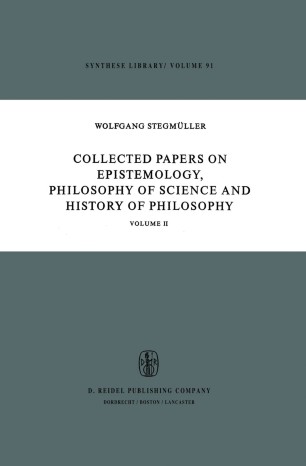 These two volumes contain all of my articles published between 1956 and 1975 which might be of interest to readers in the English-speaking world. The first three essays in Vol. 1 deal with historical themes. In each case I have attempted a rational reconstruction which, as far as possible, meets con­ temporary standards of exactness. In The Problem of Universals Then and Now some ideas of W.V. Quine and N. Goodman are used to create a modem sketch of the history of the debate on universals beginning with Plato and ending with Hao Wang's System :E. The second article concerns Kant's Philosophy of Science. By analyzing his position vis-a-vis I. Newton, Christian Wolff, and D. Hume, it is shown that for Kant the very notion of empirical knowledge was beset with a funda­ mental logical difficulty. In his metaphysics of experience Kant offered a solution differing from all prior as well as subsequent attempts aimed at the problem of establishing a scientific theory. The last of the three historical papers utilizes some concepts of modem logic to give a precise account of Wittgenstein's so-called Picture Theory of Meaning. E. Stenius' interpretation of this theory is taken as an intuitive starting point while an intensional variant of Tarski's concept of a relational system furnishes a technical instrument. The concepts of model world and of logical space, together with those of homomorphism and isomorphism be­ tween model worlds and between logical spaces, form the conceptual basis of the reconstruction.