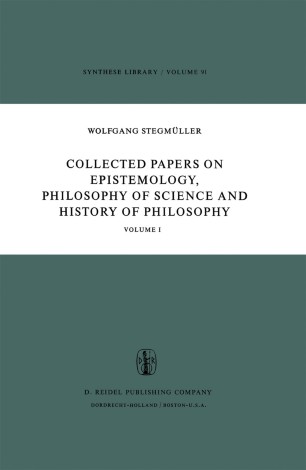 These two volumes contain all of my articles published between 1956 and 1975 which might be of interest to readers in the English-speaking world. The first three essays in Vol. 1 deal with historical themes. In each case I as far as possible, meets con­ have attempted a rational reconstruction which, temporary standards of exactness. In The Problem of Universals Then and Now some ideas of W.V. Quine and N. Goodman are used to create a modern sketch of the history of the debate on universals beginning with Plato and ending with Hao Wang's System L. The second article concerns Kant's Philosophy of Science. By analyzing his position vis-a-vis I. Newton, Christian Wolff, and D. Hume, it is shown that for Kant the very notion of empirical knowledge was beset with a funda­ mental logical difficulty. In his metaphysics of experience Kant offered a solution differing from all prior as well as subsequent attempts aimed at the problem of establishing a scientific theory. The last of the three historical papers utilizes some concepts of modern logic to give a precise account of Wittgenstein's so-called Picture Theory of Meaning. E. Stenius' interpretation of this theory is taken as an intuitive starting point while an intensional variant of Tarski's concept of a relational system furnishes a technical instrument. The concepts of inodel world and of logical space, together with those of homomorphism and isomorphism be­ tween model worlds and between logical spaces, form the conceptual basis of the reconstruction.