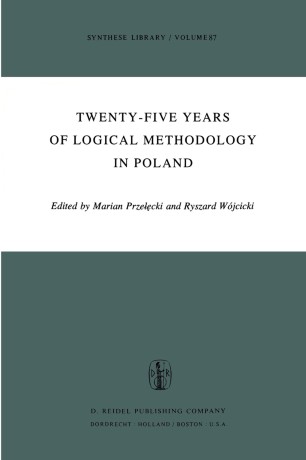 The anthology presents a selection of methodological writings pub­ lished by Polish logicians after World War 11 (the first of them dated 1947). All the papers belong to what may be called Logical Methodology or Logical Theory of Science. The epithet 'logical' characterizes rather the general point of view than the particular methods employed by the authors. Apart from articles which make an essential use of different formal (logical and mathematical) methods, there are many which do not involve any formal apparatus whatsoever. The problems the papers deal with may be characterized as problems of the general methodology of empirical science. The papers do not consider the methodological problems of formal (mathematical) knowledge, and, as a rule, they are concerned with empirical science as a whole and not with some of its specific branches. The topics covered by the selected writings include the main issues and controversies discussed within the contemporary methodology of science. A considerable part of the anthology is con­ cerned with the semantics of empirica1languages and considers problems such as interpretation of observational and theoretical terms, analyticity, empirical meaningfulness, etc. Another group of papers deals with the problem of induction and examines various ways of its justification. Some articles discuss the nature and the status of methodology itself. The materials have been selected so as to make up a whole representative of what has been done in this field in Poland since 1945. The book comprises 33 articles by 20 authors.