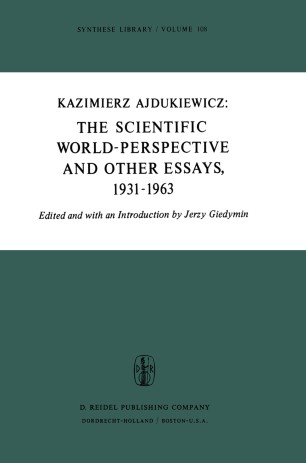 The Scientific World-Perspective and Other Essays, 1931–1963

Though with considerable delay, most of the writings of Polish logicians of the inter-war period are now available in English. This is not yet true of Polish philosophy. In the present volume English-speaking readers will fmd, for the first time, a sizeable collection of the articles of one of the most original and distinguished of Poland's philosophers of the present century, Kazimierz Ajdukiewicz (1890-1963). To be sure, Ajdukiewicz was a philosopher-logician from the beginning of his career. His first work of some importance, a monograph entitled From the Methodology of the Deductive Sciences (1921 post-dated; two abstracts published in 1919/20) exhibited two features which were to become charac­ teristic of the style of his later philosophy: On the one hand the monograph was the result of Ajdukiewicz's deep interest in the systems of modern logic, the foundations of mathematics, in the properties of deductive systems and their relevance to philosophy; on the other hand the monograph was an attempt at developing an 'understanding methodology' (in the sense of Gennan 'Verstehende Methodologie') of deductive sciences, i. e. a pragmatic study of axiomatic systems which would supplement purely formal investiga­ tions of those systems. The fonner made him a close ally oflogical empiricists; the latter was rooted in the henneneutic tradition of the second half of the 19th century (Dilthey) which spilled over into the 20th century (Spranger) and which was not cherished at all by logical empiricists.