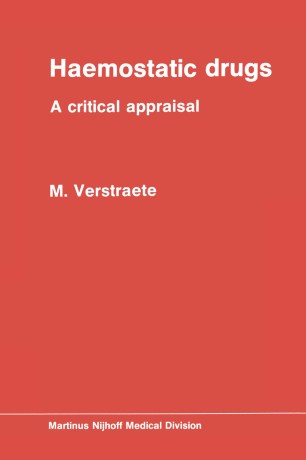 clinical efficacy of haemostatic agents had to be published work and had to fulftl most of the following minimum requirements: (1) Quantitation ofthe measured blood loss was required, and not merely a clinical impression of the amount of blood lost, if the document pertained to a planned but «open» clinical trial. (2) Only double-blind trials with random allocation of the placebo and experimental drug to preselected patients were considered suitable for discussion, if the blood loss had not been quantitated in a prospective trial. (3) Defmition and appropriate selection of patients admitted to the trial: all inclusion and exclusion criteria used to select patients had to be mentioned in detail. (4) Once included in the trial, patients could be withdrawn only on the basis of strict criteria for withdrawal which had been defined in advance. (5) A double-blind trial had to be continued for an adequate length of time if the haemostatic agent was being assessed in the prevention of bleeding in patients with a long lasting bleeding disorder . (6) A clear and detailed statistical analysis of the results was required. Moreover, a clear distinction between the therapeutic and prophylactic value of the haemostatic agent had to be made and applied separately to the group of patients without any major basic disorder and those with a bleeding disorder e.g. : chronic thrombocytopenia, haemophilia, Rendu-Osler telangiectasia ... General statements not substantiated by experimental data, even when issued by well-known authorities, were not considered a reasonable basis for discussion.