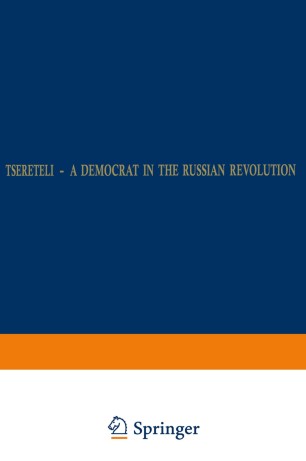 Tsereteli — A Democrat in the Russian Revolution

About Tsereteli relatively little has been written in historical literature. A study of his political career fits well into the current, gradually widening interest in the men who were the losers in the Russian revolution. A biography of Tsereteli is certainly not out of place alongside S. H. Baron's biography of Plekhanov, I. Getzler's work on Martov and the biography of Aksel'rod by A. Ascher. While Plekhanov, Martov and Aksel'rod laid down the theoretical principles of Menshe­ vism, Tsereteli was certainly their superior in the field of practical politics. The quantity and quality of the available source material is un­ equally divided over the different periods of Tsereteli's life. There is very little more about his youth than the brief notes which he himself made much later in his life, and the recollections which Boris Niko­ laevskii and Tsereteli's sister Eliko noted down from things he said. There is quite a lot of material about the student movement in Moscow between I900 and I902, in which he took an active part, so that it is possible to get a good general picture. Since the students often acted anonymously, however, it is not easy to determine Tsereteli's role.