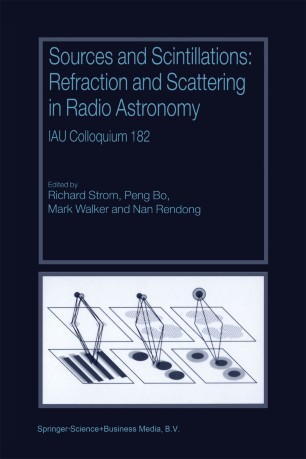 The genesis of IAU Colloquium 182, 'Sources and scintillations: refraction and scattering in radio astronomy,' can be traced to the desire, on the one hand, of Beijing Astronomical Observatory radio astronomers to organize a conference which would highlight the need for high sensitivity - as a way ofpromoting their own project to build the world's largest telescope (FAST) - and to a suggestion from Ron Ekers on the other. During a discussion with the two SOC co-chairs (as they then were not) in January 1999 in Epping, Ron noted the success ofa meeting on 'radio seeing' in Beijing in 1989, and wondered whether the time might not be ripe to organize another conference devoted to radio propagation. This set the ball rolling, and with enthusiastic input from SOC members, a successful application was made to the IAU. Later, the URSI also agreed to co-sponsor the meeting. From April 17-21, 2000, over 80 astronomers from a dozen countries met in Guiyang, China, to discuss the latestexciting results and theoretical ideas on radio propagation through interstellar, intergalactic and interplanetary space. These pro­ ceedings include almost all (95%) ofthe oral presentations given at the conference. In addition to the 52 talks presented during 5 days of the Colloquium, Ron Ekers gave a fine summary at the end to tie things up. There were also poster sessions where some twenty papers were displayed. Besides the scientific sessions, the LOC had organized a program for spouses and otheraccompanying persons.