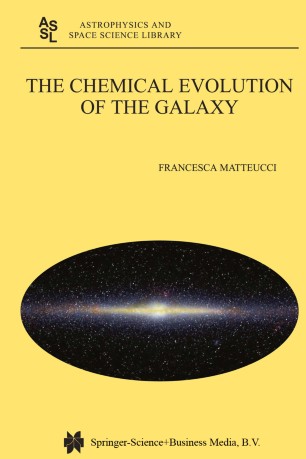 The Chemical Evolution of the Galaxy

This book is based partly on a. lecture course given at the University of Tri­ este, but mostly on my own research experience in the field of galactic chemical evolution. The subject of galactic chemical evolution was started and developed by Beat­ rice Tinsley in the seventies and now is a flourishing subject. This book is dedi­ cated to the chemical evolution of our Galaxy and aims at giving an up-to-date review of what we have learned since Tinsley's pioneering efforts. At the time of writing, in fact, books of this kind were not available with the exception of the excellent book by Bernard Pagel on "Nucleosynthesis and Chemical Evolution of Galaxies" (Cambridge University Press, 1997), and the subject of galactic chem­ ical evolution has appeared only as short chapters in books devoted to other subjects. Therefore, I felt that a book of this kind could be useful. The book summarizes the observational facts which allow us to reconstruct the chemical history of our Galaxy, in particular the abundances in stars and in­ terstellar medium; in the last decade, a great deal of observational work, mostly abundance determinations in stars in the solar vicinity, has shed light on the pro­ duction and distribution of chemical elements. Even more recently more abun­ dance data have accumulated for external galaxies at both low and high redshift, thus providing precious information on the chemical evolution of different types of galaxies and on the early stages of galaxy evolution.

"The development of the field (of galactic chemical evolution) in the past two decades is impressive, Matteucci herself having made significant contributions. As a planetary geochemist, I found her clear and precise treatment very useful... the book is an example of straightforward writing...it is easy to find one's way around."
(Stuart Ross Taylor, Dept. of Geology, Australian National University, Canberra in Nature 414:253 (2001)
Buy options