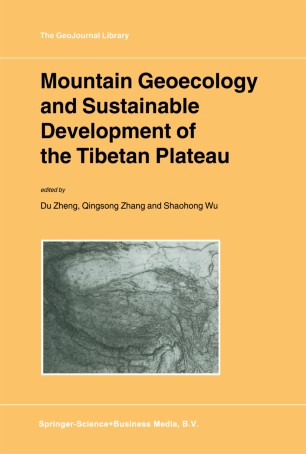 Mountain Geoecology and Sustainable Development of the Tibetan Plateau

Intense uplift of the Tibetan Plateau in Late Cenozoic Era is one of the most important events in geological history of the Earth. The plateau offers an ideal region for studying of lithospheric formation and evolution, probing into the mechanism of crustal movement, and understanding of changes in environments and geo-ecosystems in Asia. Intense uplift ofthe plateau resulted in drastic changes of natural environment and apparent regional differentiation on the plateau proper and neighboring regions. The plateau therefore becomes a sensitive area of climate change in Asian monsoon region, which is closely related to the global change. As a special physical unit, its ecosystems occupy a prominent position in the world. Due to its extremely high elevation and great extent, natural types and characteristics of physical landscapes on the plateau are quite different from those in lowlands at comparable latitudes, and environments are also different from those in high­ latitudinal zones. Consequently, the Tibetan Plateau has been classified as one of three giant physical regions in China and considered as a unique unit on Earth. Scientific surveys and expeditions to the Tibetan Plateau on large scale began from 1950's. Amongst them, a number of comprehensive scientific expeditions to the Xizang (Tibet) Autonomous Region, Hengduan Mts. areas, Karakorum and Kunlun Mts. regions, as well as the Hoh Xii Mts. areas, have been successively carried out by the Integrated Scientific Expedition to Tibetan Plateau, sponsored by Chinese Academy of Sciences since 1973.