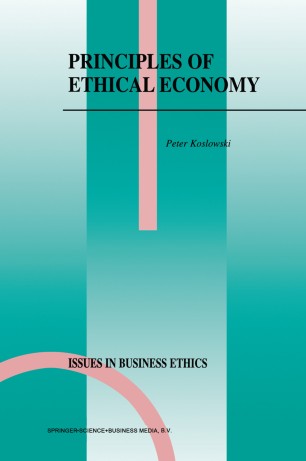 John Maynard Keynes wrote to his grandchildren more than fifty years ago about their economic possibilities, and thus about our own: "I see us free, there­ fore, to return to some of the most sure and certain principles of religion and traditional virtue - that avarice is a vice, that the exaction of usury is a misde­ meanour. . . . We shall once more value ends above means and prefer the good to the useful" ("Economic Possibilities for Our Grandchildren," pp. 371-72). In the year 1930 Keynes regarded these prospects as realizable only after a time span ofone hundred years, ofwhich we have now achieved more than half. The pres­ ent book does not share Keynes's view that the possibility of an integration of ethics and economics is dependent exclusively on the state of economic devel­ opment, though this integration is certainly made easier by an advantageous total economic situation. The conditions of an economy that is becoming post­ of ethics, cultural industrial and post-modern are favorable for the unification theory, and economics. Economic development makes a new establishment of economic ethics and a theory ofethical economy necessary. Herdecke and Hanover, October 1987 P. K. TABLE OF CONTENTS Foreword v Introduction . 0. 1. Ethical Economy and Political Economy . . 0. 1. 1. Ethical Economy as Theory ofthe Ethical Presuppositions of the Economy and Economic Ethics 3 0. 1. 2.