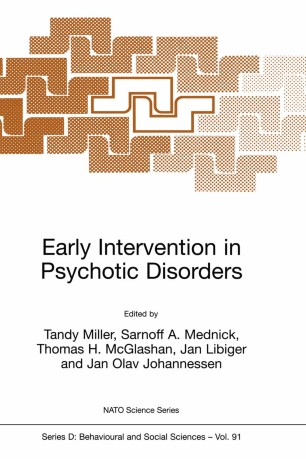 Multiple voices throughout the last century have preached the merits of various treatments for schizophrenia, ranging from cold baths to the currently accepted standards such as neuroleptic medication. Along with these ongoing treatments, there have been quiet commentaries, made mostly from the sidelines, suggesting the need to shift and refocus the way we think and talk about schizophrenia. Harry Stack Sullivan noted in 1927 that, 'The psychiatrist sees too many end states and deals professionally with too few of the pre­ psychotic" (Sullivan 192711994, p. 135). Similar thoughts have been echoed by purveyors of modem treatment for psychosis such as Thomas H. McGlashan: "Like others before me, I tried to make a difference . . . but like the others my efforts were largely in vain. I came upon the scene too late; most of the damage was already done" (McGlashan, 1996). Similar interest in the early phase of schizophrenia has developed across the globe and consolidated into a tentative, yet meaningful deliberation about the potential for prevention of psychotic illness through early identification and intervention. In the past decade, international support has grown from: Ian Falloon's prodromal intervention project in Great Britain (Falloon et aI. , 1996); Patrick McGorry's and Jane Edward's first episode psychosis program in Melbourne, Australia (McGorry et al.