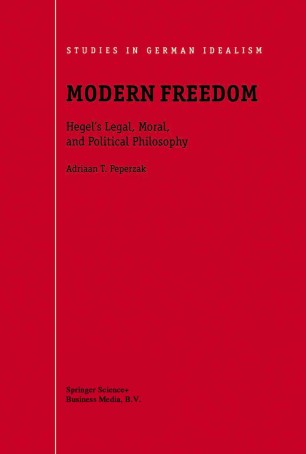 '0 ~{oc; ~paxuc;, ~ O£ 't£XVll ~a1(pft (Hippokrates) That life is short needs no proof when we are engaged in ambitious projects. When I began this book, almost forty years ago, I did not forsee that its completion would take such a long time, although I was well aware that some of Hegel's texts stubbornly resist a thorough deciphering of their meaning and argumenta­ tion. Having written a dissertation on the young Hegel's moral, political, and religious philosophy (Lejeune Hegel et la vision morale du monde, 1960'), I was asked to teach ethics, social philosophy, and philosophy of law at various universities of The Netherlands. While studying and teaching the classics of ethics and politics, I began to focus on the textbook that Hegel had written for his courses on practical philosophy: Elements of the Philosophy of Right (1820). The first result of my research was a study of the historical and philosophical context of this text (Philosophy and Politics: A Commentary on the Preface to Hegel's Philosophy of Right, 1981/1987), but the interpretation of its content proceeded slowly. While con­ ferences and colloquia occasioned fragments whose traces can be found in the following pages, the ramifications of Hegel's thought and the overwhelming amount of secondary literature demanded a great deal of time and attention and other interests continued to interrupt the project.