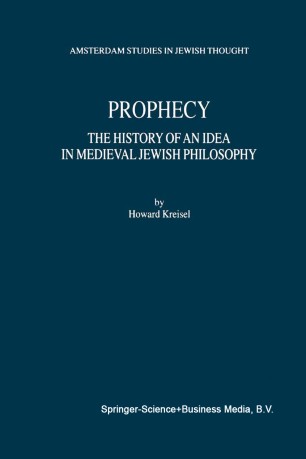 The History of an Idea in Medieval Jewish Philosophy

More than any other topic, prophecy represents the point at which the Divine meets the human, the Absolute meets the relative. How can a human being attain the Word of God? In what manner does God, when conceived as eternal and transcendent, address corporeal, transitory creatures? What happens to God's divine Truth when it is beheld by minds limited in their power to apprehend, and influenced by the intellectual currents of their time and place? How were these issues viewed by the great Jewish philosophers of the past, who took the divine communication and all it entails seriously, while at the same time desired to understand it as much as humanly possible in the course of dealing with a myriad of other issues that occupied their attention?

This book offers an in-depth study of prophecy in the thought of seven of the leading medieval Jewish philosophers: R. Saadiah Gaon, R. Judah Halevi, Maimonides, Gersonides, R. Hasdai Crescas, R. Joseph Albo and Baruch Spinoza. It attempts to capture the `original voice' of these thinkers by looking at the intellectual milieus in which they developed their philosophies, and by carefully analyzing their views in their textual contexts. It also deals with the relation between the earlier approaches and the later ones. Overall, this book presents a significant model for narrating the history of an idea.