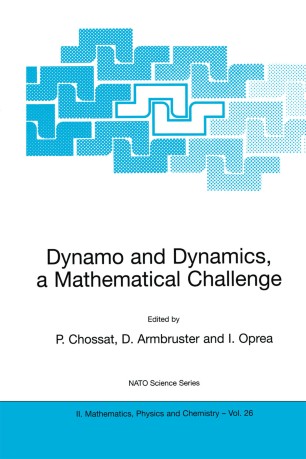 Dynamo and Dynamics, a Mathematical Challenge

This book contains the lectures given at the workshop "Dynamo and dynamics, a mathematical challenge" held in Cargese from August 21 to 26, 2000. The workshop differed from most previous conferences on the dynamo effect in two important respects. First, it was at this international conference that the experimental observation of homogeneous fluid dynamos was first reported. Second, the conference gathered scientists from very different fields, thus showing that thepynamo problem has become an interdisciplinary subject involving not only astrophysicists and geophysicists, but also scientists working in dynamical systems theory, hydrodynamics, and numerical simulation, as well as several groups in experimental physics. This book thus reports important results on various dynamo studies in these different contexts: - Decades after the discovery of the first analytic examples of laminar fluid dynamos, the self-generation of a magnetic field by a flow ofliquid sodium has been reported by the Karlsruhe and Riga groups. Although there were no doubts concerning the self generation by the laminar Roberts-type or Ponomarenko-type flows that were used, these experiments have raised interesting questions about the influence of the turbulent fluctuations on the dynamo threshold and on the saturation level of the magnetic field.