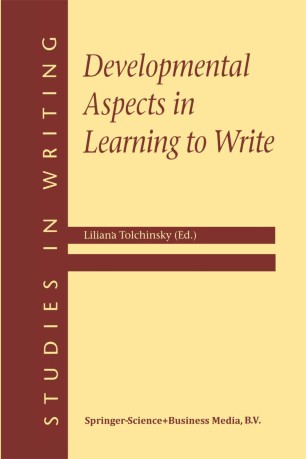 Developmental Aspects in Learning to Write

Part of the Studies in Writing book series (STUW, volume 8)

Developmental Perspectives on Writing LILIANA TOLCHINSKY University of Barcelona, Spain The advent of the sixties is considered a crucial moment for the discovery of writing as an object worthy of intellectual inquiry (Havelock, 1986). A number of books, which came out in that decade, set the stage for this turn-to-writing. One of them was the Preface to Plato by Eric Havelock. This book, published in 1963, was to become a milestone in the discovery of literacy as a field of research (Bockheimer, 1998). Havelock (1986) referred to three more works that came out at the same time, and Bockheimer suggested adding other publications; for example La pensee sau­ vage by Levi Strauss (1962); The consequences of literacy by Jack Goody and Ian Watt (1963) and La geste et la parole by Laroi -Gourham (1964/65). The authors of these books were anthropologists, philosophers and sociologists who coincided in highlighting the significance of writing for human development and, more specifically, for language development. They maintained that many insti­ tutions, ideas, beliefs, opinions and convictions of the Western world were a by­ product of an 'alphabetized mind'. Writing was for them one of the pillars of subjec­ tivity, responsible for the rise of consciousness, for our conception of words and for our notion of true and false. Amazingly linguists, psycho linguists, psychologists and educators did not participate in the turn-to-writing. The firstl, did not give any atten- 1 There were some exceptions to this generalization.