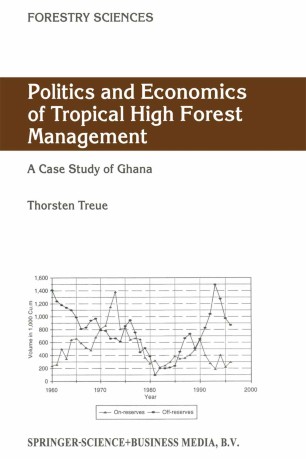 A case study of Ghana

For the last two decades the loss of, in particular, tropical rainforest has alarmed the public in the developed parts of the world. The debate has been characterised by a lack of understand­ ing of the causes and effects of the process, leading to the prevailing reaction being unquali­ fied condemnation. Such attitude has even been observed among scientists, claiming suprem­ acy to biodiversity conservation. Many scientific analyses are available, but the basis for so­ ber debates and appropriate actions is still highly insufficient. Two recent international initia­ tives! will hopefully lead to improved knowledge of deforestation and forest degradation as they recognise the need for studies to critically investigate those issues. This book will pro­ vide useful input to the initiatives. In my opinion, the scientific analyses have not sufficiently promoted the understanding that the fate of tropical forests is first and foremost a concern of the governments of the countries in which the forests are situated. Tropical forests may be important to the global environment and their rich biodiversity may be a human heritage. But their main importance is their poten­ tial contribution to improving livelihood in the countries in question.