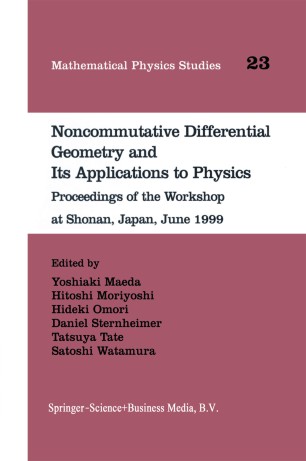 Noncommutative Differential Geometry and Its Applications to Physics

Proceedings of the Workshop at Shonan, Japan, June 1999

Noncommutative differential geometry is a new approach to classical geometry. It was originally used by Fields Medalist A. Connes in the theory of foliations, where it led to striking extensions of Atiyah-Singer index theory. It also may be applicable to hitherto unsolved geometric phenomena and physical experiments.
However, noncommutative differential geometry was not well understood even among mathematicians. Therefore, an international symposium on commutative differential geometry and its applications to physics was held in Japan, in July 1999. Topics covered included: deformation problems, Poisson groupoids, operad theory, quantization problems, and D-branes. The meeting was attended by both mathematicians and physicists, which resulted in interesting discussions. This volume contains the refereed proceedings of this symposium.
Providing a state of the art overview of research in these topics, this book is suitable as a source book for a seminar in noncommutative geometry and physics.