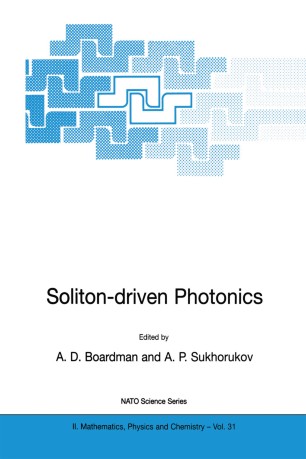 It is ironic that the ideas ofNewton, which described a beam of light as a stream ofparticles made it difficult for him to explain things like thin film interference. Yet these particles, called 'photons', have caused the adjective 'photonic' to gain common usage, when referring to optical phenomena. The purist might argue that only when we are confronted by the particle nature of light should we use the word photonics. Equally, the argument goes on, only when we are face-to­ face with an integrable system, i. e. one that possesses an infinite number of conserved quantities, should we say soliton rather than solitary wave. Scientists and engineers are pragmatic, however, and they are happy to use the word 'soliton' to describe what appears to be an excitation that is humped, multi­ humped, or localised long enough for some use to be made of it. The fact that such 'solitons' may stick to each other (fuse) upon collision is often something to celebrate for an application, rather than just evidence that, after all, these are not really solitons, in the classic sense. 'Soliton', therefore, is a widely used term with the qualification that we are constantly looking out for deviant behaviour that draws our attention to its solitary wave character. In the same spirit, 'photonics' is a useful generic cover-all noun, even when 'electromagnetic theory' or 'optics' would suffice.