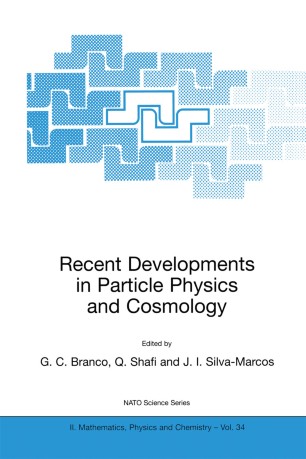 The NATO Advanced Study Institute 2000 was held in Cascais, a small town located in a renowned beach resort area, near Lisbon. The aim of the Meeting was to provide an overview and to cover the recent devel­ opments in some of the most important topics in Particle Physics and Cosmology, including Neutrino Physics, CP violation, B-Physics, Baryo­ genesis, Dark Matter, Inflation, Supersymmetry, Unified Theories, Large Extra-Di~ensions and M-theory. In the NATO ASI 2000, we had the priv­ ilege to have among the lecturers, some of the most prominent physicists working in the fields of Particle Physics and Cosmology. Furthermore, there was a strong participation by a large number of young scientists, including graduate students and post-docs who had an opportunity to learn about the latest developments in the field and discuss the various topics with lec­ turers and other participants. The enthusiasm of the young participants, the generosity of the lecturers in giving their time to participate in open discussions and debates, together with the social events and the pleasant environment of Cascais, all contributed to the great success of the Meeting. We are very grateful to Camara Municipal de Cascais for their support and organization of the reception in the beautiful Palace Condes Castro de Guimaraes and we are also specially grateful to colonel Eugenio de Oliveira for his support, to commander A. Monteiro de Macedo and to Mr.