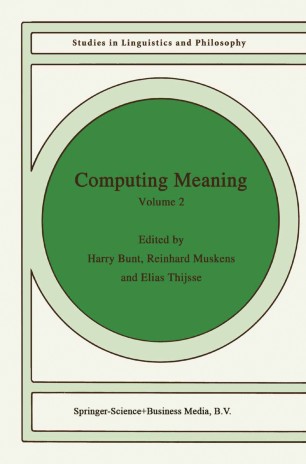 Part of the Studies in Linguistics and Philosophy book series (SLAP, volume 77)

This book is a collection of papers written by outstanding researchers in the newly emerging field of computational semantics. Computational semantics is concerned with the computation of the meanings of linguistic objects such as text fragments, spoken dialogue utterances, and e-mail messages. The meaning of such an object is determined partly by linguistic information and partly by information from the context in which the object occurs. The information from these sources is combined by processes that infer which interpretation of the object applies in the given context. This applies not only to notoriously difficult aspects of interpreting linguistic objects, such as indexicals, anaphora, and metonymy, but also to establishing the precise reference of common nouns and the scopes of noun phrases. The central issue in computational semantics is how processes of finding and combining the relevant linguistic and contextual information into contextually appropriate meanings can be organised.
Traditional approaches of applying context information to disambiguated natural language expressions do not work well, due to the massive ambiguity in natural language. Recent work in computational semantics suggests, alternatively, to represent linguistic semantic information in formal structures with underspecification, and to apply context information in inference processes that result in further specification of these representations. Underspecified representation and inference are therefore the key topics in this book.
The book is aimed at those linguists, computer scientists, and logicians who take an interest in the computation of meaning, and who want to know what is happening in this exciting field of research.