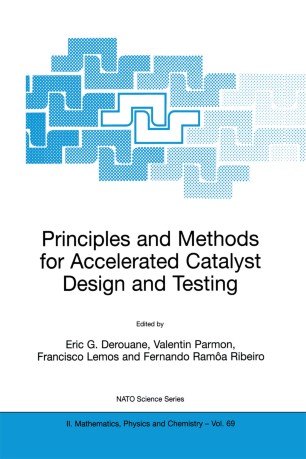 Principles and Methods for Accelerated Catalyst Design and Testing

High throughput experimentation has met great success in drug design but it has, so far, been scarcely used in the field ofcatalysis. We present in this book the outcome of a NATO ASI meeting that was held in Vilamoura, Portugal, between July 15 and 28, 2001, with the objective of delineating and consolidating the principles and methods underpinning accelerated catalyst design, evaluation, and development. There is a need to make the underlying principles of this new methodology more widely understood and to make it available in a coherent and integrated format. The latter objective is particularly important to the young scientists who will constitute the new catalysis researchers generation. Indeed, this field which is at the frontier offundamental science and may be a renaissance for catalysis, is one which is much more complex than classical catalysis itself. It implies a close collaboration between scientists from many disciplines (chemistry, physics, chemical and mechanical engineering, automation, robotics, and scientific computing in general). In addition, this emerging area of science is also of paramount industrial importance, as progress in this area would collapse the time necessary to discover new catalysts or improve existing ones.