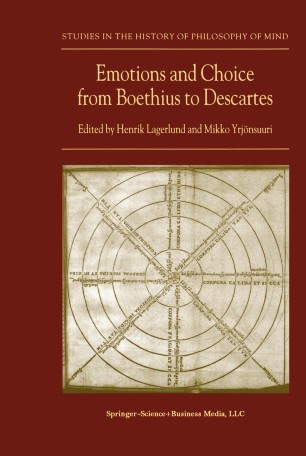 Emotions and Choice from Boethius to Descartes

Part of the Studies in the History of Philosophy of Mind book series (SHPM, volume 1)

As with almost all books, this one took much longer to complete than we thought when we started. It began within the research project "Actions and Passions of the Mind from 1200-1700" which was financed by the Nordic Research Council in the Humanities (NOS-H) between 1999 and 2001, but as the topic became clearer the book grew and the final product involves several people outside the original group in the NOS-H project. Many of the papers published here started as talks given at meetings of the project, but no meeting resembles the finished book. Indeed, all the articles are, in the end, written just for this volume. One of the overarching aims of the NOS-H project was to highlight the continuity between medieval and modem philosophy of mind, and, as edi­ tors, we also took this perspective when planning the volume. The individual articles pertain to give an accurate and philosophically interesting treatment of the thinker or period they discuss, but nonetheless the overall picture is one of continuity between not only medieval and early modem psychology of action, but also between late ancient and medieval thinking on emotions and choice.

"This is a long overdue series of studies on a very important topic. The essays in this first volume demonstrate the sophistication with which medieval and early modern thinkers addressed some perennial questions in the philosophy of mind, questions that are at the forefront of contemporary philosophical work in this field. At the very least, they bring out the continued relevance of doing philosophy historically."
(Steven Nadler, Professor of Philosophy, University of Wisconsin, Madison)
"Those of us, who like me have written about weakness of the will, and the emotions, without benefit of knowledge of medieval philosophy, have much to learn from this wide-ranging collection. From Anselm on sin to Vives on laughter, from theological to medical approaches, this book is crammed with riches."
(Annette Baier, Emerita Professor of Philosophy, University of Pittsburgh)
"[...]It is an excellent book, and I am glad to know of its existence [...] and I look forward to making use of it in my teaching and research."
(Eleonore Stump, Robert J. Henle S.J. Professor of Philosophy, Saint Louis University)
"[...] this collection is extraordinarily useful for philosophers who work outside the area of mediaeval and early modern philosophy. The contributors are well-known and the articles clear and accessible. As a whole, the book does much to open up an area of great interest. In recent years there has been a large amount of scholarly interest in emotions, their nature and role, in ancient philosophy. It is fascinating to find the continuation and development of similar debates in mediaeval philosophers. Outside the work of specialists, mediaeval philosophers tend to be seen disproportionately in terms of their metaphysical and theological interests, and this work helps to give a better view. It is also fascinating to see the relation of the mediaeval thinkers to Descartes; old ideas of a sharp break between `mediaeval' and `early modern' are increasingly seen as inadequate."
(Julia Annas, Regents Professor, Dept. of Philosophy, University of Arizona)
"...Though some essays are more history than philosophy, the collection nevertheless balances out and brings to the reader an in-depth study of what the editors rightly describe as a neglected field of research...it is highly recommended to those whose research deals with such topics [rational choice, free will, or weakness of will], or is in the field of the history of philosophy of mind."
(Kurt Smith Bloomsburg, University of Pennsylvania in Journal of the History of Philosophy, 42:1 (January 2004)
Buy options