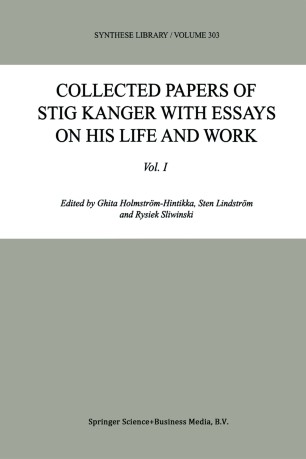 Stig Kanger (1924-1988) made important contributions to logic and formal philosophy. Kanger's dissertation Provability in Logic, 1957, contained significant results in proof theory as well as the first fully worked out model-theoretic interpretation of quantified modal logic. It is generally accepted nowadays that Kanger was one of the originators of possible worlds semantics for modal logic. Kanger's most original achievements were in the areas of general proof theory, the semantics of modal and deontic logic, and the logical analysis of the concept of rights. He also contributed to action theory, preference logic, and the theory of measurement.
This is the first of two volumes dedicated to the work of Stig Kanger. The present volume is a complete collection of Kanger's philosophical papers. The second volume contains critical essays on Kanger's work, as well as biographical essays on Kanger written by colleagues and friends.