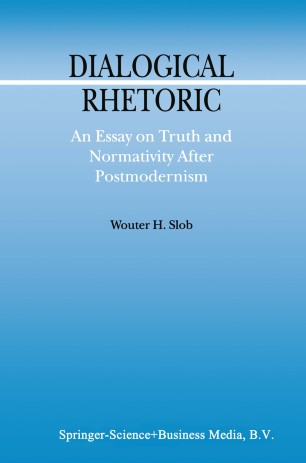 An Essay on Truth and Normativity After Postmodernism

Contemporary developments in philosophy have declared truth as such troublesome, and not merely gaining access to it. In a systematic survey this study investigates what is at stake when truth is given up. A historical overview shows how the current problem of truth came about, and suggests ways to overcome rather than to repair the problem.
A key issue resulting from the loss of truth is the lack of normativity. Truth provided an alternative understanding of normativity. Elaborating on the `dialectical shift' in logic, a dialogico-rhetorical understanding of normativity is presented. Rather than requiring truth, agreement, or rationality, dialogico-rhetorical normativity is the result of a balance of particular standards. This type of normativity is shaped within discussions - by advancing and accepting arguments - and is not located in sets of predetermined rules. The result is a `small' but strong form of normativity.
If this understanding of normativity is viable, one of the central problems of contemporary philosophy, the problem of incommensurability, can be seen in a different light. As a result, truth reappears again. Surviving the postmodern criticisms, it is a matter of accountability rather than of description.