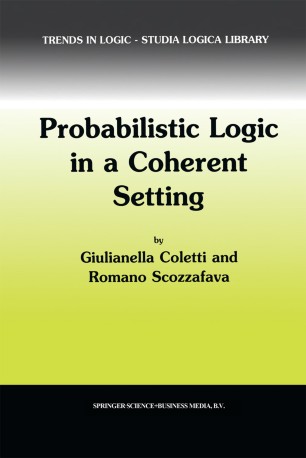 Probabilistic Logic in a Coherent Setting

Part of the Trends in Logic book series (TREN, volume 15)

The approach to probability theory followed in this book (which differs radically from the usual one, based on a measure-theoretic framework) characterizes probability as a linear operator rather than as a measure, and is based on the concept of coherence, which can be framed in the most general view of conditional probability. It is a `flexible' and unifying tool suited for handling, e.g., partial probability assessments (not requiring that the set of all possible `outcomes' be endowed with a previously given algebraic structure, such as a Boolean algebra), and conditional independence, in a way that avoids all the inconsistencies related to logical dependence (so that a theory referring to graphical models more general than those usually considered in bayesian networks can be derived). Moreover, it is possible to encompass other approaches to uncertain reasoning, such as fuzziness, possibility functions, and default reasoning.
The book is kept self-contained, provided the reader is familiar with the elementary aspects of propositional calculus, linear algebra, and analysis.